History of Bulgaria and its economic specifics

WELCOME TO BULGARIA! One of the hottest investment locations in Europe today!

There's not another place like it anywhere else! From its sandy beaches to its stunning mountains, Bulgaria is blessed with more than its fair share of natural resources. Beautiful in nature, unique historically, rich culturally, and hot economically, Bulgaria has quickly emerged as one of the most exciting investment locations in Europe today! I would like to share here some general information about the most developed sectors in Bulgaria and future possibilities for investments.
Real estate sector
Property in Bulgaria, by Western European standards is very inexpensive. Bulgaria has so much to offer it is not surprising it is quickly getting more popular as an alternative country for property investment from the traditional European destinations.
Construction sector in Bulgaria
Construction is everywhere in Bulgaria. Most Bulgarian major cities and resort destinations have seen a boom in construction in recent years. Construction of residential, commercial and industrial properties is a very attractive investment proposition in Bulgaria since construction and land costs are fairly low, while the demand for modern and high quality real estate in booming. In addition, Bulgarian and foreign banks are competing hard in lending money to businesses and households for the purchase of real estate in Bulgaria.
Tourism sector in Bulgaria
Tourism is the fastest growing sector in the Bulgarian economy with excellent opportunities for foreign investment with high return on investment ratios. Already, the Black sea and the ski resorts are attracting massive foreign investment interest. The beautiful nature, the abundance of natural resources, and the rapidly improving infrastructure are creating numerous possibilities for better than average investment returns
Software development sector in Bulgaria
Due to the strong Bulgarian education system there is a solid talented and skilled workforce in Bulgaria. There are many small and medium sized software companies that produce world class quality software solutions at a cost that compared to the rest of Europe are indeed very reasonable. It all plays out very well in favour for the Bulgarian software makers, who offer quality, flexibility, cultural compatibility, and reliability to Western customers. Establishing production or R&D centers in Bulgaria also offer a very attractive value proposition to investors.
Food and beverages sector in Bulgaria
All conditions for production of quality fruits and vegetables, meat production, dairy production and wine production in Bulgaria are present! Strong traditions, excellent climate, availability of quality workforce and low operational costs make this sector extremely attractive to investors. Compared to other major EU producing countries, here the production costs are significantly reduced, and all it takes is good transportation to the EU open market, which Bulgaria is a part of.
Textile sector in Bulgaria
The textile and clothing sector has become one of the Bulgaria's most competitive industries in recent years with considerable investment, and export and employment opportunities. Bulgaria is number 1 in Eastern Europe in textile exports to the United States. Some of the regional advantages that Bulgaria offers include: Long lasting traditions in textile and clothing manufacturing, World class quality and reasonable prices, Average monthly wage in textile and clothing is in the range of 200 Euros per month, Many companies are working on CM and CMT basis with foreign partners, thus constantly improving their expertise and the quality of their services.
Agriculture sector in Bulgaria
The Bulgarian agriculture sector is quickly rebuilding itself after it fell into decline in the early 1990's. As the country is due to enter the European Union in 2007, there are vast opportunities for major exports into the EU market. Land is quite cheap at some areas and is suitable for many cultures. In addition, Bulgaria has a long Bulgarian tradition in agriculture and that also makes for a a solid foundation of successful agricultural ventures
Energy sector in Bulgaria
1.Hydro energy in Bulgaria
Bulgaria is actively working on the development of its hydrological sources in an effort to limit the dependence on foreign fuel imports. Around 63 small and micro Hydro Power Plants were located on the National Energy Company's (NEK) property, most of which have been privatized.
2.Wind energy in Bulgaria
The European Union has set a directive requiring its members to to produce at least 20% of their electricity by environmentally clean and renewable sources. Certain areas of Bulgaria have favourable wind conditions and investments in wind power generators are showing good returns.
3.Biomass in Bulgaria
There is good potential for utilizing biomass as an energy source in Bulgaria. While information regarding the use and potential of biomass has been limited, there have been recent developments through pilot projects and preliminary evaluations that begin to highlight Bulgaria's full potential. Results have appeared promising, although a lack of project funding has hindered the forward progress of this resource
4. Solar energy in Bulgaria
A sizeable portion of Bulgaria's land area receives medium levels of solar radiation. Bulgaria is awarded from the Foreign Direct Investment magazine for one of the best location in the world for best locations for solar panel projects.

The city of Varna is about thousand years old. Due to its favourable geographic location, the place was first inhabited by an ancient Thracian tribe, Corbisi, which had a small fishermen settlement there. In the 6th century BC a Greek polis, named Odessos, emerged there. The town became a fishing and farming colony, which soon turned into commercial hub. The town fell under the siege of Alexander of Macedonia’s troops in the 4th century BC, but after the siege did not succeed to subject it, the town was given autonomy within the limits of his Empire. Up to the 1st century BC it was an independent polis, which minted its own coins with the image of its god. Later on, conquered by Mark Lukulus' legions, it became a Roman centre though gradually it lost supremacy in the region. In the 9th century it was already called Varna. The town was included in the territory of Bulgaria in the beginning of the 13lh century during the reign of King Kaloyan. Despite its strong defence system, the town was conquered by the Turks in 1391 which gradually transformed it into an oriental city with konaks (town-halls), Turkish baths and mosques. In 1878 Varna was finally liberated from Ottoman rule and became the most important Bulgarian seaport. Even if the city was industrialised, it also developed into a seaside resort, and a favourite holiday place for the Bulgarian cultural elite. The city carried the name of Stalin for a short time, but after 1956 it returned the name of Varna. 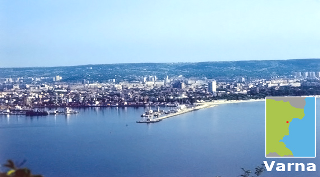 The city of Varna is the third largest city in Bulgaria with its population of about 350 thousand people. It is widely called the seaside capital of Bulgaria as it is the biggest city at the Bulgarian coast. The city lies in the Bay of Varna, nestled in a deep valley between the Frengen Plareau and the Avren Plateau. Varna is over 12 km long, while its width, including newly erected residential quarters, is nearly 9km. The city’s structure resembles an amphitheatre as it follows the curves of the Bay of Varna. It is surrounded by gardens, vineyards and groves.
Cost of Doing Business in Bulgaria is very attractive. Bulgaria offers foreign investors some of the world's most competitive business costs. Real estate investment has produced a plentiful supply of modern offices at very competitive costs. Corporate taxes and labour costs are quite low for European standards. Privatization and deregulation are creating sophisticated public utility and telecommunications industries.
Bulgaria has a traditionally strong education system. The literacy rate in Bulgaria is 93 percent. Children go to school from the age of 7 ands stay on till 18 years old. There are over forty Higher Education institutions in Bulgaria offering degrees at the undergraduate and graduate level. There are nursery schools available from the age of 2 years old and this gives children a relaxed atmosphere to learn the language when coming to live here. There are also schools which teach 100% in English for the English speaking students.
The aptitude of workers and the relative low cost of labour are considerable incentives for foreign companies to invest in Bulgaria.
Bulgaria is making a considerable effort to offer the lowest corporate taxes in Europe. Corporate tax rate in 2007 went down to 10%. Tax on dividends is 5%. Personal income tax is 10%, deductions are also allowed.
Bulgaria has a very strategic geographic location. Its position on the European continent allows investors to reach the entire market of the European Union and the markets of central and eastern Europe, which represent a total population of 853 million. In April 2004, the country became member of NATO. In 2007 the country has become the EU member.

Bulgaria and its capital Sofia offer a cosmopolitan quality of life that is regarded as among the highest in Europe. First time visitors to Bulgaria are often surprised by the diversity and stunning natural beauty. For years a real effort has been made in order to preserve the country’s rich and unspoilt flora and fauna. As a result, today’s Bulgaria is ecologically one of the purest countries in Europe, with exceptionally clear air and water resources. Not only is the quality of life in Bulgaria good, but the cost of living is one of the lowest in Europe. 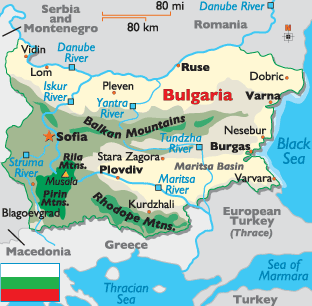 Visit the first page www.safe-office.net to select your language.